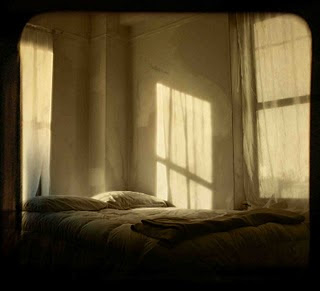 We have a friend who is dying. It was sudden. There he was entertaining us, fake punching us, there he was passing out the cards, or ordering the eighth beer tower between the three of us while we're puking our guts out on the floor.
Now he is lying on the bed comatose. Distant, unreachable.
We are sitting on opposite sides of his death bed. Sometimes we glance at each other, hesitantly, never knowing what to expect.
I feel like telling them. The one dying. The one living.
That she has left. That my heart and soul has been ripped asunder. That there is a void in the centre of me so large, so massive, so powerful that it feels like everything might fall in.
But I cannot speak it. It would feel like a mockery.
To speak of living death before the dying.
We both of us die in the still tense silence.
Posted by Daef at 6:02 PM

too many deaths in silence, but it's the numbness that eventually kills.

eyy thanks for putting my photo in your "navel vision"
haha

I've learned through personal losses, that in death, we learn about living. Human have the tendency to take their loved ones for granted..it's only human...death is a reminder that we shouldn't.

My consolation for the death of my loved ones are that they are in a better place than where we are right now... only thing, we cannot help but miss them. And that again, is just being human..

p.s I think you may need to use the "subtitle application" on this website, to help some of us comprehend some of the comments in here ;->

Dear blog owner
I would like to invite your readers to visit my own blog at OPEN Forum(Malaysia) on the religious stroking action going on off late at myopenforum.wordpress.com

Hi, Nice site I enjoyed reading it. Thanks for sharing. Would you please consider a link to my website on your page. Please email me back. Thanks!

Thank you for this excellent post. Very informative!
kiss918 apk is arguably the most prominent online casino in Malaysia, bringing you the hottest, top trending games on the internet, all in one destination. 918 Kiss has all sorts of entertainment content, ranging from fishing games and live table games to one of our main attractions that is slot games.
kiss918 online
Kiss918

I really appreciate your blog. Simply awesome!
Natural Joint Supplements Duplex® strives to be your trusted healthcare brand, a brand that will never settle for less than the best. We firmly believe your health matters. At Duplex®, we pledge to make your well being our priority. Our aim is to deliver effective, yet affordable healthcare simply because we believe good health makes living more meaningful. We are your trusted ally on the journey to attain a healthy mind, body and spirit.

What an amazing post! Keep up the good work!
joint supplement malaysia Duplex® strives to be your trusted healthcare brand, a brand that will never settle for less than the best. We firmly believe your health matters. At Duplex®, we pledge to make your well being our priority. Our aim is to deliver effective, yet affordable healthcare simply because we believe good health makes living more meaningful. We are your trusted ally on the journey to attain a healthy mind, body and spirit.
anti inflammatory natural medicine
supplements for painful knee
broccoli sprout malaysia, botanical powder mix & antioxidant rich foods

Your topics are always interesting and educational. I enjoyed it very much!
Microsoft Office Specialist RE2 Learning Solutions (Asia) Sdn Bhd was founded in 2016. The company is one of a leader in the field of professional IT training in Malaysia. Over the years, RE2 (Asia) has helped thousands of young learners, companies, government departments and agencies to improve and develop their IT skills.
Microsoft Office Specialist Certification

Awesome post. Very inspiring!
Established in 2002, RE2 International Computer School was one of the first schools in Malaysia with a well-developed ICT curriculum for Primary School and Secondary school students. Our curriculum was heavily based on the national curriculums of The United States of America and United Kingdom.
Computer Class In Ipoh
Computer Course In Ipoh

Terrific post! Love your work!
Rebrand Web Design Malaysia Web Design KL Rebrand specialise in website design, e-commerce solutions, digital marketing, branding strategy and much more. We strongly believe that having a high-quality website doesn't necessarily need to cost a huge sum of money. Hence, we are a group of professionals that came together with a goal in mind: to deliver excellent web designs that provide value to our customers that range from startups to enterprises and large organisations.
Web Design KL
Web Design Malaysia